Different Aspects of BlockChain Technology to Impact your Business. 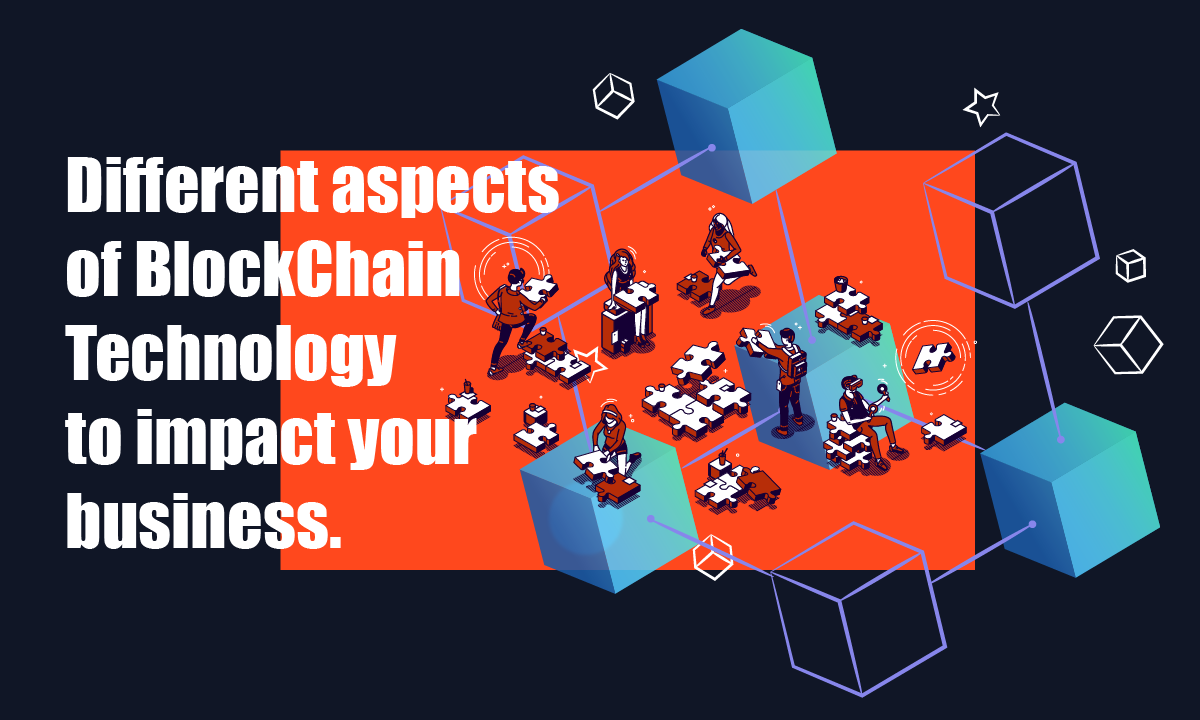 When Bitcoin was introduced in this world by Satoshi Nakamoto in 2009 in a mysterious way, who was him is still a riddle for the market, but this unknown man revolutionized the policies of the market since then. Bitcoin is the reason behind the discovery of a Blockchain.com New-York-based organization that simplifies the ledgers-based transactions into small chunks and makes the whole transaction process easy with zero tolerance of any kind of fraud and cheating in transactions.

The company initially started as the first Bitcoin Blockchain Explorer in 2011 and after some years itself introduced a cryptocurrency wallet which according to a general elucidate 28% transactions of Bitcoin during the last 8 years from 2012 to 2020. It is also solely responsible for operating the exchange of cryptocurrency and provides the strategies, charts, and analytics towards market lending business.

Why Blockchain Got Popular in no Time:-

Blockchain is another revolutionary idea after smartphone technology during the last decade for the business market. We all know how the smartphone market has evolved and grown so much that it becomes a necessity for everyone.  On the same note Blockchain technology of distributed ledger systems, all around the world is valuable for entities transacting with one another.

This modest distributed ledger technology helped the enterprises and whole system of entity exchange and processing way easier and secure without any mutability in the data and transactions. The participant’s user can easily see every exchange of transactions in real-time which simplifies and abruptly ends the smuggling of goods in large quantities.

Harmony:
The major key benefit of this Blockchain technology  is the consent of all participants and agreement of all once all are ready to process the entity, only after that the event of the block is being recorded. Blockchain's unique characteristics can increase trust, security, and transparency. It also brings other benefits to businesses that reduce cost and other aspects.

Imitation:
Once a block of the transaction is being recorded it gets updated in the form of a replica to all the ledgers of participating partners around the world just to make sure that the block is completed from a certain level to a specific one. Due to this; no trust issues happening in any way and every participant is aware of every small transaction.

Immutability:
Another best thing about Blockchain technology is its unchangeable behavior of blocks, once any block is kept recorded it is immutable for a lifetime. Immutability makes all transactions and third-party associates fraud negligible and all the stakeholders feel safe due to this as blocks once recorded can’t be updated later.

Safekeeping:
The creation of blocks can only possibly be done by trusted clients, not everyone has the permission to create blocks and access them. There are few agents included and assigned for keeping the record of the block entity. This makes the whole process highly secure and well versed to manage the transparency among ledgers; which makes stakeholders keep trust in this. The data that is stored in the form of blocks is inaccessible and next to impossible for cracking the encrypted data blocks and alterations in it.

Decentralized Structure:
Blockchain has an ecosystem that builds trust with no central character or entity between participants; everyone has some role to play in order to record the blocks and tracing the transactions between initial ports to the final destination. Everyone needs information from each specific role to maintain the order and reasonableness in that chain, since no one is responsible for transferring the data from one place to other it makes their work easier and decentralized.

Cost Cutting:
Various businesses are dependent on a supply chain management system that includes multiple roles of participants; from suppliers and transportation companies to producers, distributors, and retailers. Generally, this Blockchain transaction system helps a plethora of businesses to cut their costs by eliminating the third men between all the processes like vendors and third-party providers which work the same as Blockchain does.

Swiftness:
Blockchain has eliminated the middlemen or third-party vendors from all the transactions which make the whole process of transactions a bit speedy and simplifies the conventional work including paperwork and information parsing from one place to another for further processing. Research experts have concluded that Blockchain typically is much faster than all the conventional methodology and beats other processes and technologies in terms of speedy transactions. Although it often depends on the size of block data stored and network speed.

Data Control Management:
Blockchain makes it possible for an entity or organization to easily manage one's own digital data. This makes it feasible and usable in terms of data; where data is more valuable than the currency itself said by technical experts. Blockchain naturally protects the data that belongs to you and allows you to control it. Anyone who is a participant in the Blockchain transaction system has their own chunks of digital data, they are solely responsible for whom they want to share and for what time with limits imposed by Blockchain-enabled smart contracts.

Tokenization:
Technology has improved the processing of a digital or physical amount of data by implementing in the form of digital token to confirm and process the things; that is then recorded on and then shared via Blockchain. Tokenization has smoothened the other as well as transactional processes between businesses and organizations, which makes the Blockchain feasible and faster among others. Passing digital data in the form of tokens makes the whole scene of supply and maintains ledgers super fast and prominent.

Blockchain Technology has benefited many spans of industries though but still, there are some particular industries that are making most of their profit after opting for blockchain-

Blockchain is evolving on a daily basis unicorns such as Walmart and IBM also have chosen this technology to maintain the supply chain of their products. It is not short-term technology that can be worn out, but it’s something very powerful and the safest way among other technologies to maintain digital ledgers and tracking records of multiple entities and transactions among B2B or B2C by eliminating the middlemen. This shared record made the whole supply chain management system more valuable and feasible from less paperwork and fewer disputes to happier customers and entirely new ways of doing business.