Is Social Media App Still Worthy to Get?? for an Owner 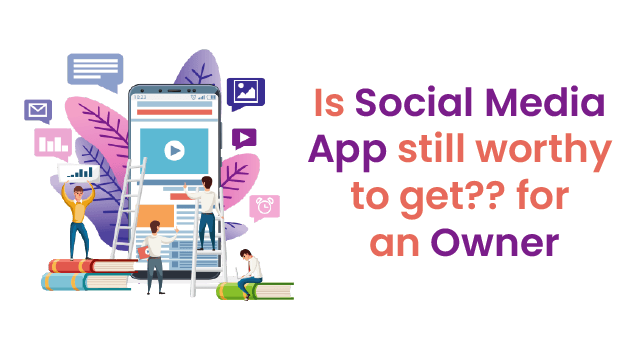 How have you started your morning today?

Must have checked your smartphone!! Right, haven't you?? to see notifications and messages of your friends and dear ones. We are living in such an era where all the things that happen on our fingers move. Unlike the old days where people or our ancestors had to wait weeks to get a letter in their letterbox, we have social networking apps to receive messages in the blink of an eye.

Now we have Facebook, WhatsApp, Snapchat, Instagram, Telegram Apps to communicate with our friends and any unknown person sitting on the other corner of the world. These social apps have become a necessary part of today’s generation. Well as time has passed these apps get updated with rich features and many more functions to make them more functional and useful just than a chatting application.

Nowadays these social media apps are playing an imperative part in growing businesses as well as your popularity if you have some real skill and talent. These apps turned some very ordinary people into a brand by making them popular. People can spread out their delicate and trade acquaintances also by connecting with others on social networking applications.


How does a social network work?

Before understanding how to make your own social networking app, you need to know, what is social network? And how does it work??
A social network can be defined as a network or platform of particular folks who meet up over the internet/online to exchange a few words by redistribution of some information related to images, Do comments and posting images and short clips, or sending messages..

What exactly makes all that happen?

When people want to connect with each other on the basis of the same interest, hobbies, common beliefs, and knowledge exchange. Human psychology says that people are interdependent and due to this people always find someone for approval, recognition, and to socialize with known and unknowns.

Most importantly the people who are already familiar with each other become online friends and their related friends showed up as suggestions to others. That’s how all social apps work for communication and sharing thoughts.

To create a social network with important features such as effective communications between people from here and there isn't as easy as it looks. The news feed section is the sole purpose of such kind apps, as people want to indulge in content sharing, hitting likes and comments over posts they get in their feed.

Must have Features for any Social Media App:-

Just think It, which is better to fill in all details or to signup using automated existing social accounts. If any app provides the new experience to the user with one button “Connect with” or "Login using" one of the existing apps. Users are convinced to use it automatically as it is time saving.

2. Platform to Express Oneself

In order to build an app where every user feels unique and to show the world how creative, talented, skillful he/she is. Your app must include some features that can help with this like sharing and posting videos and short clips, Dynamic profile features to change name and profile pictures etc.

People are public creatures and have various reasons to engage and interact with another person to tell them and express themselves. To create a network of user choice or the same kind of kinder and empathy they get to know each other well on the basis of similarity of thoughts and actions. Developers must include the perfect mathematical algorithm to invite friends and suggestions in one click.

You know what makes a Social Media App more engaging and popular amongst people, it’s the content that generates an enormous amount of attraction itself. It makes it possible for people and users to emphasize their thoughts and express their opinions which is one of the benefits of social media – When you start to develop a Social Media App for business you should ask the developers to  account for that newsfeed content.

An app can be more useful if there is another way of interaction with third party apps like facebook,whatsapp for sharing content and post instagram and twitter to socialize and get more exposure among friends and outside the world. Some platforms to grow or do more networking are professional platforms such as linkedin and indeed to build a career as well as give you exposure in professional terms.

Building a Social App can be Challenging:-

Ever heard that somebody built an app, but for no reason?? No!! Never!! and you won't. Every app has a purpose to serve and an audience to use from a significant community or interest and demands. Some of the respective challenges any owner or entrepreneur can face or should take steps.

Data is the most important thing we have in our phones and gadgets. And if something is breaching it, it would be disastrous to anyone's life. So you can have an app idea or team to get it implemented but the most crucial clog of the whole process is Privacy of the user. You can't compromise on that.

If an app is not understandable by people in an easy manner then, it's the sure chances to fail in the near future. Nobody wants to use an app which has a user interface which is really hard to use. If users can’t figure out how to use your app, it results in poor usability. Any developer team should keep in mind about UI/UX for smooth user experience and rightly so! at last they are the reason for doing all.

The major challenge is to store all the data of users like their personal profiles, sharing content,pictures,videos,and content they are going to post. To manage all this you need to store and manage the database. There are various kinds of databases like PostgreSQL, MySQL, Microsoft SQL, or Oracle database. Moreover companies prefer PostgreSQL with django because it works perfectly fine to handle data in such kinds of apps.

Imagine you launched an app but you have no control over it to manage things such as inappropriate content, false news and morphed images and posts. What would happen if this happens... to avoid these kinds of situations you need to have an admin panel not only to monitor the  inappropriate content but also a skilled team to manage all that which is necessary in such a business.

With such apps you need to integrate many data sources such as maps, API, places for geolocation and tagging. Sometimes people like to share and update about the places they go wherever they are like restaurants, clubs and other places and these data sources allow them to use location services instead of typing the name of place and city where they are.

How much does it Cost; to an Owner??

After reading all this stuff, you must get that idea about how a social networking app works and the challenges one can face during its build time. Now here comes the thing that what's the overall cost an owner has to pay to get such an app.

You see every app has such features which are tough to build and take a lot of time. And it solely depends from company to company as far as price is concerned.

We at, Engineer Master Solutions after a research and discussion come over the conclusion that time spent on each feature can provide you with a rough estimate of working hours depending on the functionality taken by developers-

So it is clear that more than 300 hours it takes to build such a complicated app and integrate all the salient features it needs. Now the price may vary from place to place and company to company as there are various factors including in it such as technology used, and services or functionality you choose for the app.