Why Hybrid Mobile Applications is best for your business? 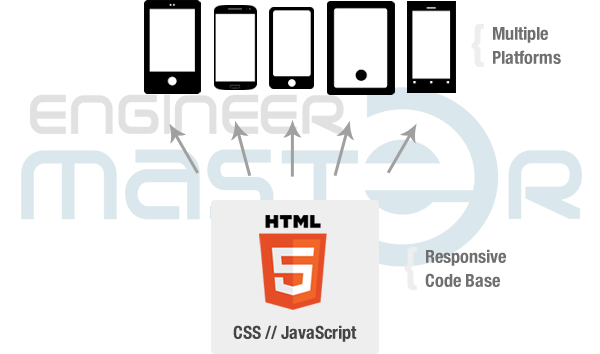 The internet is overflowing with debates about the faults and merits of native and hybrid web apps. Predictably, some favor the former and others the latter. However, it would be naive not to consider the advantages of hybrid apps when discussing app development options.

While native and hybrid web apps are built on significantly different forms of technology, most people don’t know the difference between them. To add more confusion to the mix, hybrid native apps combine elements of both native and web technologies.

So, both the technologies have their advantages and disadvantages, and Engineer Master Helps you to find Best for your Enterprise.

What is Hybrid Apps?
Hybrid apps is natives apps but content is run on web based.

These apps can be downloaded from app stores and installed on mobile devices where they can be accessed via a designated icon on the home screen.

Because they reside within the device itself, native apps are very good at accessing data provided by some of the functionalities in mobile devices, such as GPS information, accelerometer data, contacts, etc.

Native apps can also access push notifications, enabling the app to notify users about content or other updates, which is essential to many apps.

Although web apps also have access to some of this functionality, native apps have deeper integration with it and give developers more ways to build the features as desired.

Moreover, native apps are constantly working in the background whether the app is open or not; this means that it will continue to process data and receive updates even when you’re not using it.

Web apps, on the other hand, are developed using web technologies such as HTML, CSS and JavaScript. They exist entirely within browsers such as Safari and Chrome and are essentially mobile websites.

It is therefore not possible to download them from an app store, although many mobile devices allow you to “bookmark” them as an app icon on your home screen.

Web apps can be designed and optimized to appear as native apps and some devices even remove the top bar of the browser to make them look even more so.

On the other hand, web apps lack a lot of the benefits that native apps provide; they only work online and they don’t have access to as many phone features as native apps do.

However, they do have access to some essential features such as GPS, camera and phone calling, which are often sufficient for many apps. Other features such as push notifications are currently inaccessible via web apps.

The reason why many companies opt for web apps rather than native apps is that they are generally considered easier and cheaper to develop, as more developers are familiar with web than with native app technologies.

Furthermore, web apps are readily scalable to a variety of operating systems and devices because mobile operating systems interpret web technology in mostly the same manner, and the same code can be reused across different operating systems. Native apps, on the other hand, always need to be built from scratch, taking up more time and resources

As I mentioned, hybrid applicationss combine the power of native and web apps to use the benefits of both.

At their core, hybrid apps are web apps wrapped in a native shell. This means that while the basic infrastructure of hybrid apps is native, the content is web-based. So hybrid apps are like a native app with a browser embedded within it.

By combining both technologies, hybrid apps can take advantage of all the native features of native apps – accessing data from other apps, offline working, ability to be downloaded from an app store – while the actual content relies on HTML being rendered in a browser.

The Minimum Viable Product (MVP) approach necessitates the fast deployment of functional solutions in order to be the first to penetrate the market and gain a substantial competitive advantage. Those who need to have their app in the App Store as fast as possible should seriously consider using hybrid applications.

The important feature of the every mobile applications is offline support. but web applications are limited by their lack of offline support. This may seem like a less important issue for people who live in urban areas, where the access to high-speed Internet access is low, but potential customers from rural areas and less developed countries could be cut off from access to the application. At the end of the day, one customer survey showed that 79 percent of consumers would retry a mobile app only once or twice if it failed to work the first time, and only 16 percent of consumers would give it more than two attempts. Local storage can also dramatically enhance the overall user experience by storing personal information and preferences for later use.

Because of their native infrastructure, hybrid apps can work offline. Although, while offline, data can obviously not be updated, users are still able to load the app and access previously loaded data, unlike web apps.

Data created while offline–whether captured via forms, surveys or any other way–can also be stored on the device and sent to servers as soon as the user connects to the internet.

Hybrid apps, like native apps, are able to access data that devices pick up via functionality such as GPS and camera, but also push notifications and address book information.

Being able to connect with this functionality gives hybrid apps much more freedom as to the kind of things they can do.

Some challenges that developer will have to face while development:

Because of its content being based on web based layer, hybrid apps can be slower to load than native apps. However, there are ways to manage this and at we are using great mobile frameworks(Ionic Framework, OnSen UI etc) and we deliver surprising result to our clients.

That extra layer also makes debugging a potential nightmare. We are reling on the framework itself to play nicely with the targeted operating system and not introduce any new bugs. Since our team members have a good knowledge about the platforms, so we will neglect this issue with our experience team.

Web apps and native apps may seem very similar, but they are based on completely different infrastructure, both of which have their benefits and their drawbacks.

Hybrid apps are now allowing developers to take advantage of the benefits of both kinds of apps.

At present, the great advantages of hybrid apps make them the most cost-effective ways of building optimal mobile apps and the differences in performance compared to native apps are not significant enough to warrant the extra cost and efforts.

However, as more developers acquire native coding skills and more resources for native coding appear online, it will be interesting to see whether there is a shift towards creating more native mobile apps.

Hybrid mobile applications have their place in every situation where fast development is the main priority or where the high cost of targeting each platform with an individual native application would be downright prohibitive. Big players and companies who need to stay on top of the latest development are not likely to sacrifice performance and control. However, it may be just a matter of time before hybrid application frameworks reach such a high level of maturity that all previously mentioned negatives will simply disappear.